Rudraksha is a genus of large evergreen trees with more than 360 species distributed in the tropical and subtropical regions of the world. The scientific classification of Elaeocarpaceae to which Rudraksha belongs to is as follows :

In the late 19th century a botanist, Dr. William Roxburgh, had classified the most popular variety of these trees found in Nepal while studying the flora of India and Nepal in his capacity as Director, Indian Botanical Garden, Kolkata. He is considered an authority on Elaeocarpus Ganitrus Roxb, commonly called Rudraksha, which matched the broad specifications given in our old religious texts. Elaeocarpus Ganitrus Roxb are mostly found in Nepal and Indonesia with the beads from Nepal being much larger than the Indonesian variety.

In Greek, elaei means ‘wild olive’ tree and carpus means ‘fruit’ and therefore the seed of fruit from wild olive-like trees have been classified as Elaeocarpus. In Sanskrit, Hindi, and Marathi it is known as Rudraksha, in Kannada as Rudrakshi, in Tamil as Rudrakkam, in Telugu as Rudrakshalu, and in Bengali as Rudrakya.

These trees can grow up to 14.60 to 29.20 meters in height depending on area (Nepal Rudraksha trees are over 20 meters tall) and have trunks up to 1.22 meters in diameter. 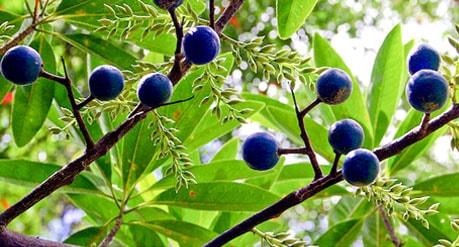 After about a month of flowering that begins around mid-November fruits begin to appear, but only when the trees already are 7-8 years old or more. Younger trees flower but do produce fruits. The fruits are green in color and after maturity start turning blue and then bluish-violet, then deep brown and finally black. On removal of this outer flesh of the fruit the bead we call Rudraksha is found. This bead has a very hard rough surface having uneven grooves and a long hole in the center from the point where it remains attached to the stem. The bead contains seed/s inside and receive their nourishment from the central cavity. From this central cavity vertical clefts remain attached. While each cleft has separate compartment having one internal seed, the joint of these clefts protrude outside the body of the seed. This joint, visible from outside, is known as mukhi.

Rudraksha’s outer fleshy skin is hard to remove. The seeds are buried inside the earth along with cow dung and table salt for couple of weeks for the skin to become soft. The beads can then be taken out easily. The farmers adopt different practices to remove the outer skin and for cleaning the Rudraksha seed. For example, in some cases, the seeds are boiled in water and then allowed to get fermented so that the skin becomes soft (however, by this method the beads become darker).

A mukh is a complete dividing line running from top of the seed unto its bottom. Generally in 2, 3, 4, 5, and 6 mukhi rudraksha this dividing lines are more or less equally spaced (there could be several exceptions). In the higher mukhis the mukh may be spaced unequally although the better looking ones are those having nearly equal spacing of surface. This is an important point to remember while identifying genuine rudraksha from fake ones. This feature makes it slightly difficult for people manipulating the beads by creating extra lines. There are unscrupulous people who very cleverly study the free space availability and shape before creating the extra line and this makes it difficult for an ordinary customer to identify the bead. These free spaces are used to create extra mukhis to create higher mukhi beads. This is done usually for 12 and higher mukhi beads. An expert can easily identify the manipulation by just examining the bead with the naked eye.

About 70% of all rudraksha beads from nature are 5 mukhis, 20% are 4 and 6 mukhis and the balance 10% makes for lower mukhis (1,2,3) or higher mukhis (7, 8, 9 and upwards). Rudraksha of 16 mukhis and upwards are really rare and only few pieces are found from nature in an entire year. Only one or two pieces of 20 or 21 mukhis and one or two Trijutis occur in nature each year. Gaurishankar (two beads joined naturally on the trees and having one common shell outside) is also a rare variety. 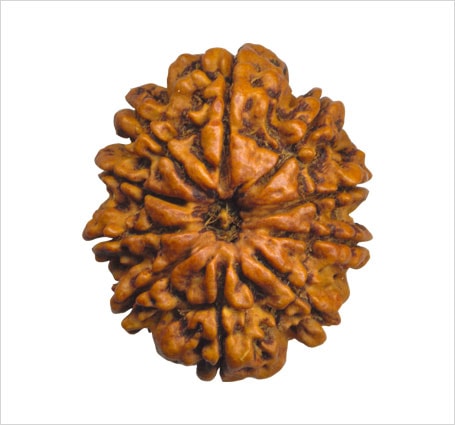 Internal Structure of Rudraksha and Genuinity of the Beads

Rudraksha seeds differ in structure according to their sources. Nepali and Indonesian beads (Elaeocarpus Ganitrus Roxb) have one compartment for each mukhi in the vertical segment. Each compartment may have a seed inside, brown or blackish in color from outside and off-white/white from inside. The number of compartment (clefts) in a rudraksha should be equal to the number of its mukhs. A 7 mukhi will have seven compartments and a 12 mukhi will have twelve compartments. The same is the case with 1 mukhi or 2 mukhi beads. This is a crucial test to establish the genuineness and authenticity of a rudraksha.

However, this may not be applicable to Dehradun/Haridwar rudraksha as in this variety all rudraksha from 1 to 4 mukhs have only one seed inside. It is, therefore, quite easy to make a fake 1 mukhi bead from say either 2, 3, or 4 mukhi rudraksha of this variety because it will show only one hole/seed. However, it should not be presumed that all 1 mukhi rudraksha of Dehradun/Haridwar variety are fake, although it will be of ‘medium’ quality. One should be able to recognize the fake beads by close examination and finding out that extra lines have been erased. Therefore, the lustre, hardness, density, and surface characteristics must be determined first to fix the source and type of species – whether it is from Nepal or Haridwar/Dehradun and then apply the above principles.

Indonesian rudraksha has the same characteristics as Nepal variety as far as internal structure is concerned. As we know, the power of rudraksha emanates from the internal seed. Therefore, it is very important to understand this conclusion. A 1 mukhi rudraksha from Indonesia has one seed inside (or one cleft or compartment), 2 mukhi has two seeds, 3 mukhi has three seeds and so on as in the case of Nepali beads and there is no confusion. A 1 mukhi from Indonesia is thus a natural rudraksha. The kaju (cashew) shaped 1, 2, and three mukhi beads also follow the same pattern like Haridwar/Dehradun types whereby there is only one hollow slit inside these beads, irrespective of the number of mukhis.

Obviously, to check the authenticity of rudraksha beads to check the compartment the bead would have to be cut open. So non-destructive test methods like X-ray began to be used that unfailingly established the authenticity of the bead so that the number of internal compartments and seeds can be directly observed without destroying the bead. The number of internal compartments can be easily observed in Rudraksha through digital X-ray.

Sinking in water: A ripe rudraksha, plucked from tree will have density higher than water. It will, therefore, sink in water. However, if a bead is externally tampered with and lines altered or two beads glued together, they will all sink. Also, if a bead is made of light wood or if a low density berry is cleverly impregnated with heavy metal or lead the bead will sink in water. Hence this is not a foolproof test.

The specific gravity of rudraksha is higher than 1.00 and as such the bead should sink in water in most cases. Therefore, it is not wrong to assume this test as an important parameter, but it is not enough and other aspects must be clearly understood. Many people try this test on rudraksha mala of Indonesian beads. They try to dip the entire mala along with the thread that the mala is beaded in. Normally, because of the thread, the mala may not sink initially. But, once the thread gets heavy in water, it becomes heavy and the whole mala will sink. Ideally, the beads should be taken out and dipped in water separately. The Indonesian small-sized beads sink only when these are of high quality and higher specific gravity. If they float it must be presumed that the density of the beads is low and they are not necessarily fake.

The test is not effective in another instance. If you have a perfectly formed bead with a larger hole, it will not sink in water unless all the trapped air inside the bead vents out and water gets in. it may take few minutes for this to happen, but by this time most people will conclude that since the bead did not sink, it is fake.

An old and dry bead will also not sink in water. Similarly, a genuine bead plucked unripe or sourced from a low-density species, also will not sink.

Therefore, this test, mostly popularized by traders, is not a foolproof method for all rudraksha. At best, it can be used on a genuine rudraksha just to confirm that it is from a ripened fruit and it is of proper density.

Boiling in milk: There is no scientific basis to prove that milk can be preserved for a longer period of time if it is boiled with a rudraksha. True, the bead may increase the electrical charge in milk and it may have some property in curing some of the mind-related diseases and also in increasing memory.

There are several other gimmicks and unfounded methods employed by traders and other interested parties that people who wish to procure genuine beads often get confused. One amusing test suggested by a local seller to identify a genuine 1 mukhi rudraksha is that if this bead is kept immersed in a bag full of rice or beneath a huge bunch of Pipal or Bel leaves overnight, the bead will automatically come on top the next day morning. It is not true. It is therefore necessary to understand that none of the above tests have any firm scientific basis.

The gaseous composition as determined by C-H-N analyzer and by gas chromatography shows rudraksha consisting of : Carbon 50%, Nitrogen 0.95%, Hydrogen 17.89%, and Oxygen 30.53%.